It's here! Or there. As the case may be. The app store now offers our first ever app, a kid's app of Old MacDonald's Farm with paintings and animation by our boss Norm Magnusson and vocals in English by Jill Sobule and in French by Dominique Durand of indie darling band Ivy. Sound effects are by hot shot movie sound guy Coll Anderson and the whole thing was produced by Mister Paul Millman.
But enough about the credits. Here's the link to the app store.
And here are some scenes to give you all an idea of what it looks like. 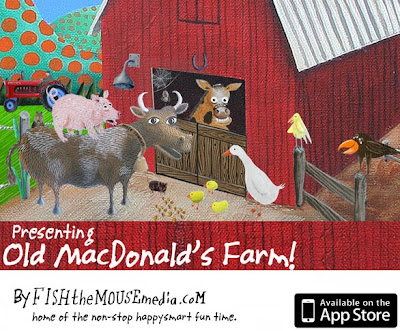 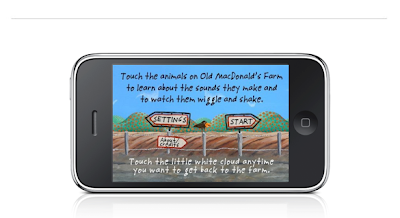 Posted by norm magnusson at 4:18 PM No comments:

Sweet mother of Kennedy! We finished our first soup-to-nuts and pearls-to-swine political campaign last week and it was an amazing experience. Just amazing. If you want to know exactly how amazing, you'll have to buy each and everyone of us here at Woodstock Organic Concepts a few beers to loosen up our tongues. Otherwise, we'll just stick to the facts:
Our guy won. Jeff Moran. Keep Jeff Moran Woodstock Town Supervisor. He won another 2 years as 'mayor' of our small town. It was a long and complicated campaign with lots of players but W.O.C. provided the image management from start to finish, with a little sometimes-but-not-always-helpful input from everyone else under the sun.
We'll spare you all the details and spare ourselves the 5,000 words it would take to tell them. Here's the topline of what we did that helped Jeff win:
1) Once his platform had been written and the competitive environment had been analyzed, we were ready to identify the candidate's unique selling proposition (USP) or brand essence or brand DNA or turf or whatever else you want to call it. For our guy it was "don't mess with success." He was the incumbent and had done a great job during his first term. Everyone said so. We executed this concept by using the format of "Keep (fill in the blank)" for all of his communications, a format we lifted from the suggestion of a past town supervisor who said that Jeff's campaign promise should be to "Keep Woodstock Small and Beautiful". Perfect. Keep Woodstock thriving. Keep the Comeau for all Woodstockers. Keep Woodstock Elementary open. Et cetera. It's positive, it's differentiating, it's ownable. And the candidate liked it. So that format became our hook, our main way of communicating his USP.

2) Jeff Moran's major negatives going into the campaign were that he was perceived as an elitist and as the anti-green candidate. Here's what we did:
a) As there were no other "Jeffs" running in the area, we were able to drop his last name from the bulk of our communications and refer to him simply as "Jeff", working against the elitist perception.
b) We recommended a snappy URL "KeepJeff.com" and helped set up a website that laid out his platform in a simple way.
c) We made his logo out of grass and daisies, turning him instantly 'green', which in fact, he was.

d) We included this message on the website and on all communications: "If you have any questions on this or any issue of town business, please call me at 679-2113 ext. 7." Because really, what kind of elitist public servant passes out their phone number in case you have a question?
3) We relentlessly recommended against print advertising and for person to person contact. For the primaries, we set up a phone tree to reach out to the 700 voters identified as likely to vote. This outreach was our stated number one priority in every meeting with the candidate and his advisors and was based not just on the numbers but also on our category insight that in local political elections, there is always somebody in every cluster of people who knows the inside scoop. The guy next door or down the street or at the meat store who pays attention to this stuff. He or she is the person people look to for "who do I vote for" guidance and so we had to get to them.
4) We set up political committees and letters to the editor campaigns to address the important election topics from a variety of perspectives.
5) We set up Facebook groups and YouTube videos and ran print ads and did door hangers and direct mail pieces and all the stuff that you'd expect. It didn't hurt.
6) We got the candidate out there to every pancake breakfast and soccer Saturday and senior's meeting.
7) And this is the really interesting part: our chief officer sent out a personal email explaining why he was supporting Jeff. It started with the admission that he had begun working on the campaign not as a supporter but as a mercenary, and went on to explain how he had personally been won over in the course of the work. The letter received numerous replies from people saying they hadn't known who they were going to vote for, but now they would vote for Jeff. Wow. In the course of the campaign, our boss had become the guy that people looked to for election guidance and our early thesis was proven correct. He personally swayed votes.
8) Lastly, we stayed cheerful and helpful despite a lot of crap.
As we mentioned, it would take thousands and thousands of words to detail all the work that went into this. If you want them, pay with beer. The more beers, the better the story will get. Otherwise, we hope you enjoyed this summary.
We'll leave you with one of the advertising pieces we liked best from the whole campaign, a print ad for Team Woodstock that sold Jeff as the coalition candidate that he was: (click it to enlarge) 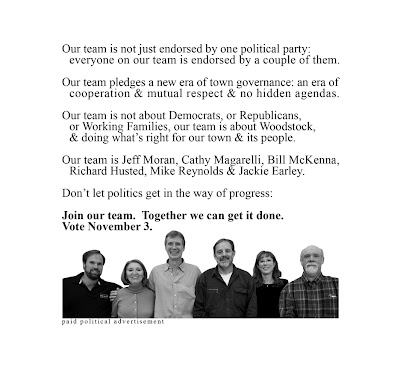 Posted by norm magnusson at 6:07 AM No comments: