Our primer on email marketing

Well, we just finished doing a big email marketing campaign for a client and so, as it always goes, we get a bunch of inquiries from other clients, current and potential, asking us how to work this very effective media. Well, taking our own advice (see #6 below), we've posted our email response here. We'll tweet it later.

A dozen tips for a successful email campaign

You could buy or borrow a list, but the best names on your email list are the ones of people who have actually asked to be there. Make sure your website, your blog and your social media all offer an opportunity for people to sign up for email news. Likewise whenever you’re out in the real world, at conferences or trade shows or anywhere you might go.  Also, don’t forget that your emails themselves may be forwarded around, so always include a sign up link in the email itself.

Content is king. Tell a story or, preferably, use a real anecdote that is going to be helpful to your target. Illustrate how your goods or services solved a problem or increased sales, as seen here or here.

Use client success stories, testimonials, relevant content found on the web, and so on and so on . . . take it (with proper attribution of course) and use it and make it make sense for your clients, as seen here.

Your company should be seen as a problem solver, not as a shill. Your readers don’t really care about your company unless it can solve some of their problems. Keep this in mind always.

4) Pull them in deeper

Creating hyperlinks that lead your readers away from your email actually helps build long term loyalty. In each email, try to include one link that leads outside of your company (click here) and one that leads inside, to your website or blog, for example.

5) Make a record, create a library, be the expert. Blog.

A blog allows you to create a permanent record of all your success stories in one easy to use, searchable location. Use it frequently and it will make you look like the expert you actually are. Every email should include a passive link or an active redirection to your blog.

And if it’s worth doing all that, it’s even more worth doing it all again. Reach and frequency are the classic measures of advertising media, but for some reason these days, many people don’t think to send their message out more than once.

In fact, reposting in any format can increase reach by up to 50%. Think about how you personally use social media: you’re on at a particular time of the day, day after day. If someone posts updates during the times you’re not there, you might just miss them.

Invite all your employees to blog about your goods or services and how they work in real world situations for real world users. There are no better experts than your own employees. Let your customers hear from them -- many of the questions your clients or potential clients might have about your goods and services will be answered in this way.

Mine these posts as a source of email content.

Keep It Simple, Make It Fun. If you have a more complicated story to tell, tell it after the jump with a link so that your readers won’t get bogged down with it unless they want to.

Even the Nigerian 419 scammers know this much.

Send them to friends on Macs and friends on PC’s. Send them to androids and iphones. Make sure your email (and any included images) works in all formats.

Most mass email programs (such as Constant Contact, MailChimp or iContact) allow you to see how your various emails are performing. Without feedback, there can be no learning. Pay attention to what’s working or not and soon enough, you’ll develop a nice feel for email marketing.

Take care to delete those who have asked to be removed, delete duplicates, add new contacts. Update it after every single mailing; it’ll be best for everyone.

Posted by norm magnusson at 1:00 PM No comments:

Well, a friend of a friend put us in touch with the proprietor of this cool start-up that restores vintage tube amplifiers. They needed a logo for their name: Vintage Vacuum Audio.  We did a whole bunch of logos, generated free hand and in photoshop. Many of them really nice work. And then, casting about the world of high-end audio refurbishment, we saw a sine curve on an oscilloscope and lo and behold! there it was: VVA. Right there in the fancy equipment used to repair the fancy equipment. We love it when luck checks in to the creative process.

Posted by norm magnusson at 1:13 PM No comments:

When the Catskill Mountainkeeper came knocking on our door looking for an anti-fracking campaign, we'd already seen lawn signs all over the state, most of them making a not-too-clever-but-still-kinda-effective play on the similarity between the words "frack" and "fuck." And so naturally, we wanted to do something different. 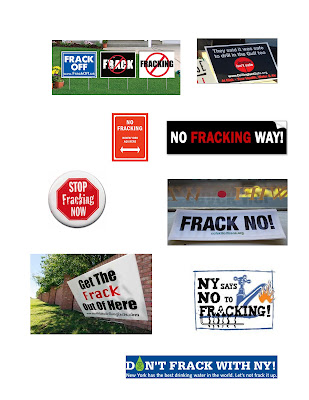 The facts about fracking, the ACTUAL facts are fairly disturbing from an environmental point of view. The question is how to get them out there in an impactful way. That's where Cheltenham bold hd comes in handy. It's the font used on New York Times headlines. Automatically adds an air of authority to the facts. And for media, we took it out of the front yards and into a medium that imparts a little more authority: billboards. 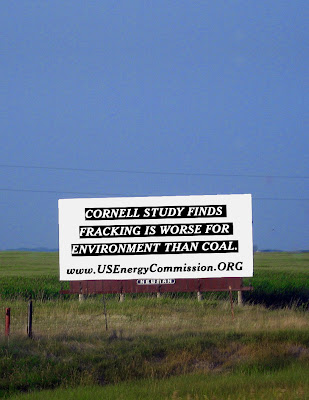 But wait! Don't stop there! Who's gonna sign off the ads? If these were "signed" by the Catskill Mountainkeeper, people might automatically write them off as mere tree-hugging cry-baby propaganda. So we created the US Energy Commission.  DOT ORG! A website that would have explained more of the actual facts about fracking's environmental impact. 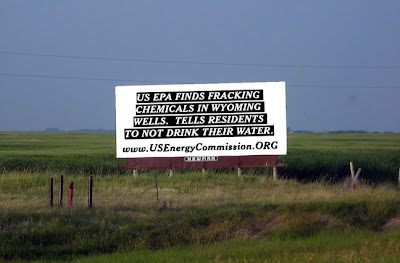 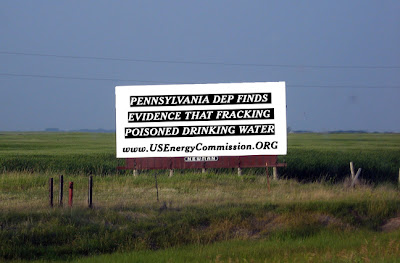 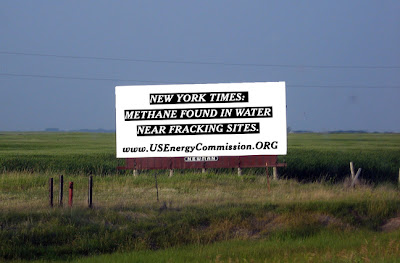 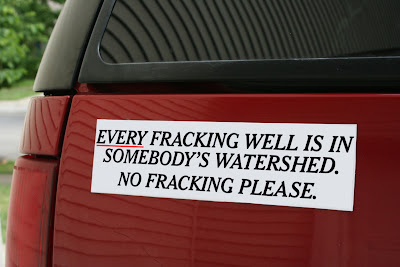 And that's it, a slightly subversive campaign to win friends and influence people. Or at least it woulda been. Our contact at the Catskill Mountainkeeper org didn't like it for some reason that we can no longer remember. And it died a lonely death only to live on in the annals of ads we wished we'd done.
Posted by norm magnusson at 11:29 AM No comments:

We don't usually go in for spec. work, but the opportunity to pitch some website ideas for Dr. John was just too evocative to pass up. We came up with two ideas, both pretty fun, but judge for yourself. The top one would be a sculptural object -- an old apothecary/voodoo cabinet with live buttons throughout, and the bottom one is a flowchart mapping the many worlds the good Dr. inhabits. 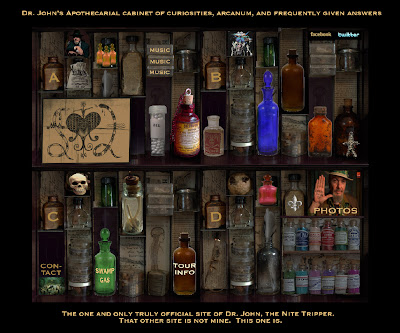 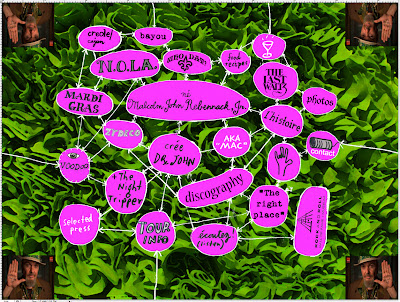 Posted by norm magnusson at 9:51 AM No comments:

Once in a while we get called in to help with a name. It almost always spills over into logo and branding. Cause, really, what's in a name?  The world of successful consumer brands with crappy names is huge. Smucker's even made a whole ad campaign (complete with SNL parody) on THIS VERY TOPIC years ago.

However, in this case, the existing name represented a missed opportunity. The name that came into our office was "Sweet girl brownie company." We felt that "sweet" was a wasted word since "brownie" already connotes sweetness. So we changed the name to Happy girl brownie company, feeling that "happy", a word describing emotions, added something to the story rather than just fluffing up what's already there.

The client also had an illustration they'd found online that they liked. A cute, big-eyed girl who would be their spokes model.  We liked it well enough and sent them off to an illustrator to make it their own.

In the meantime, we mocked it up as a potential label on brown paper and kinda dug the way it looked. Then we found a kid's drawing lying around the office and we all fell straight in love with it -- it resonated so deeply with the innocent bliss of eating a brownie. We loved it, the client loved it. Now let's see how it flies. 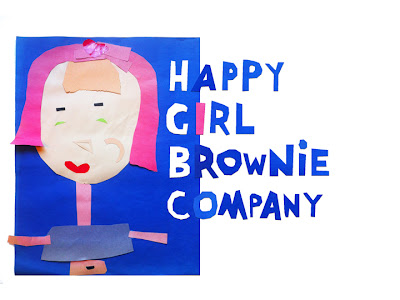 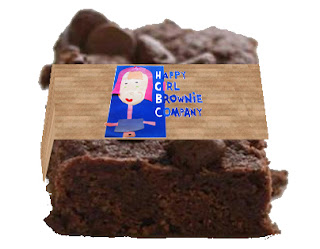 Posted by norm magnusson at 9:42 AM No comments:

Labels: brownies, funism, happy girl brownie company, logos, norm magnusson, woodstock organic concepts
Well, we did it again. We weren't going to, but this was the 60th anniversary and all, so when the fine folks at WAAM called to ask us to produce this concert again, we kinda couldn't say no. And, as often happens, we ended up well rewarded for our involvement.

To begin with, the talent. Ooooooh, the talent.  Jazz legend Karl Berger agreed to perform and Cage biographer and iconic art critic Kay Larson agreed to speak.  Honest to goodness, what a treat to get such heavyweights involved. In a FREE concert!!

If you want to read more about it, click on the alphabetical press release here. Otherwise, just take our word for it: it was freakin' awesome and we were sincerely honored to be involved. 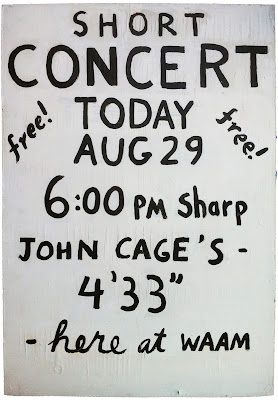 Posted by norm magnusson at 8:25 AM No comments: