We just got an email about a potential illustration gig; something we've done a few of over the years and have always enjoyed.  Traipsing through the files of old illustrations and pondering doing another one, we tripped across this one from 1999 or so:  Absolut Magnusson.  Absolut had a whole campaign of artist's interpretations of the bottle and it was thrilling to be asked to do one.  The watercolor study (below) made it through the agency in NY, was approved by the importers and sent off to Sweden, where it died of unknown causes.  It was fun anyway. 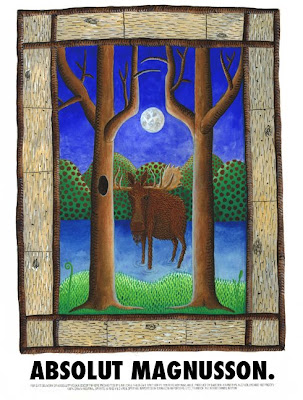 Posted by norm magnusson at 8:17 AM No comments:

One of our most fun jobs last year was the opportunity to design a logo for Jill Sobule's new record label, Pinko Records.
We started looking at other logos and they all had one thing in common: they were either illustrations or were created in Photoshop. Thusly identifying the design zeitgeist, we were able to zig where everyone else zagged, and decided to create an actual, physical object for the logo.
The object we proposed was a red silk flag with a black star in the middle.  The black star would look like a vinyl record and the label in the middle would read "Pinko" and we would shoot the whole thing against a blue Catskills sky.  Jill loved it right away, so we started production.
The flag design was created in Photoshop, the massive file sent via YouSendIt.com (love that service) to ArtFlag in NYC and within a week, the flag was here in Woodstock being tied to a long stick and starring in its very own photoshoot.  The photos turned out great, we added a little filter mood and type to it and voila.
Another great summer gig was doing some billboards for an upscale casino/resort/hotel in Las Vegas. Many of them had the famously awesome headlines that our boss Norm Magnusson is renowned for, but this one below is our favorite of the batch.

2008 was a deeply political year both nationally and locally, where an election for the board of education for the wider district would decide the fate of one of our local elementary schools. The election hinged on getting people from the town of Woodstock out to vote and this poster we did was widely credited with tipping the election in the desired direction. 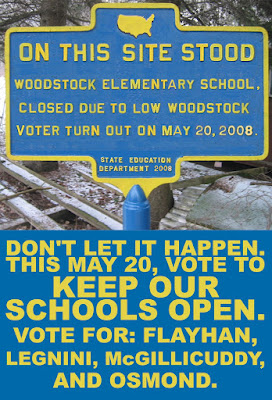 A small job to design a logo and cards and letterheads and whatnot for our friend Belinda Pruyne's company Life Vision Strategies was another case of having a perfect client, which basically means she bought everything we sold and said we were brilliant exactly as many times as we needed to hear it each day.
The concept she bought was a concept we created so many years ago and dubbed "dynamic design".  The concept seems to be getting a little more traction these days, but trust us, when we first introduced it to the world in the early 90's, it was truly groundbreaking.  Here's how it goes:  if your brand owns and is defined by a certain look or typeface or color combination, you can strip away a lot of filler and still telegraph the design essence of the brand with just the bare bones of those elements.  Then you can replace the filler with whatever you want and it will all still read as an ownable manifestation of the brand.
Here's how 'dynamic design' plays out with the LVS look:  we own the 'LVS' and the 'LifeVisionStrategies' below it.  We own their relationship to each other, the size of the letters, the space in between them and so on.  These are the defining elements.  The space inside the letters 'LVS' can be filled in with a color, a series of colors or something more symbolically rich.  Guess which of those options we like best as you peruse the 4 versions below. 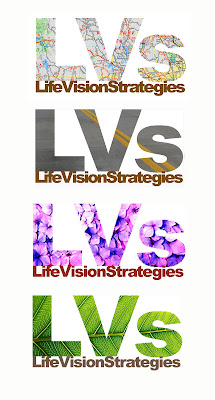 On the freebie front, we did some work of which we're well proud.  Here are a few examples: 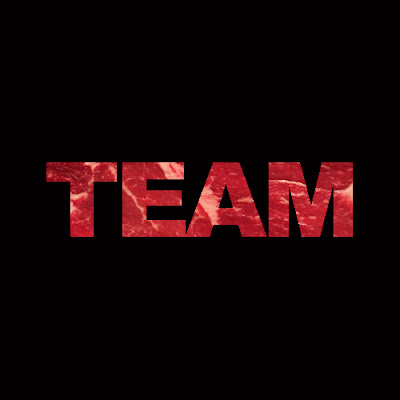 . . . a whole slew of invites for Dave's charity golf tournament, including this one . . . 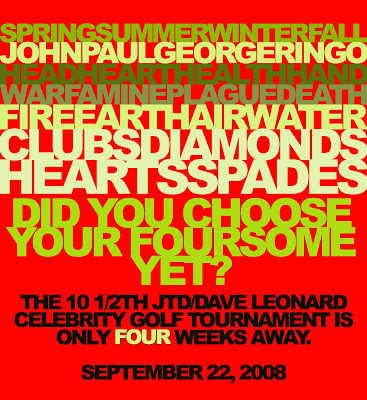 . . . some radio for Dave's DJ company JTD Productions . . .
. . . and perhaps our very favorite gig of the whole year, a job that launched an entire new branch of viral philanthropy: AIDS Global Action.
When we sat down with AIDS Global Action to discuss their needs, it was obvious from the get-go that they needed more than just a web redesign and new ways of talking about what they do, they needed a new strategy for fundraising and we came up with a doozy, a whole new idea in giving.   Here's the press release: 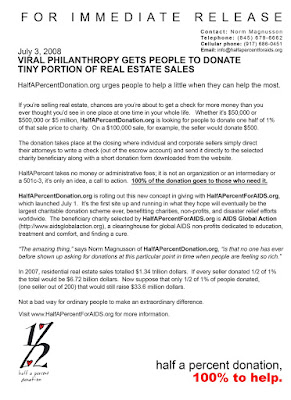 We did the concept, the logo, the website, the blog, the P.R., the copy, the art direction, everything.  And couldn't be more proud.  The amazing thing, as mentioned in the press release, is that no charity has ever before shown up at this particular point in time with their hand out.
The original idea, "half a percent for AIDS" quickly morphed into "half a percent donation" and eventually people will be able to choose from a whole list of potential charities to help out with their donations.  Visit the website here: www.HalfAPercentDonation.org.
Last but not least, we did a fun series of logos for our own company. Whenever the mood strikes us, we will do more and, as always, if you have any ideas to donate, please call or write. Attribution will be given immediately even if compensation is slow.

Posted by norm magnusson at 5:49 AM No comments: