We've played this video to everyone who's visited the offices for the past week or so and finally decided to post it.  Keep your eye on the ball, as they say.
Awareness Test - More amazing videos are a click away
Posted by norm magnusson at 4:46 AM No comments:

These two organizations are run by the same group of people and serve related causes, dealing with airborne illnesses that are a result of toxic exposure.  So we wanted to create logos that would relate to each other.  Since we're deep into a logo love affair with Arial Black, we were off to a good start, the other defining characteristic of them both was the concept of rising from the smoke.
For Recover, which is primarily an online resource for health care and public health professionals, the smoke was created with binary code, a series of ones and zeros laid over each other until nearly black at the bottom and light and ethereal at the top.  Here the Arial type is filled in with blue sky and clouds, symbolizing the clean breathing that will be the result of physical recovery from exposure.  The URL is part of the logo, adding more context to the binary code background.
For the LMPHC, the 'rising from the smoke' concept was paid off with the literal smoke of ground zero in a moving photo taken by Photographer's Mate 2nd Class Jim Watson of the U.S. Navy.  (which means it's in the public domain)
We like doing logos and hope it shows: 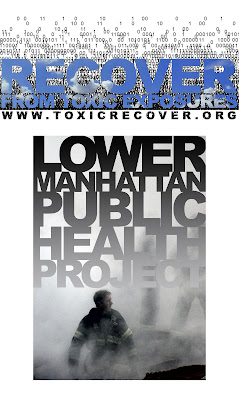 Posted by norm magnusson at 7:12 AM No comments:

This talk fit right in with some of the other marketing trends we've been posting about -- the Smart-growth manifesto and the 'don't advertise, start a movement' movement.  He's an entertaining speaker, enjoy.
p.s. It almost seems like we need another word than marketing to describe this new technique of moving the masses.  Hmmm.  Massvertising, social marketing, group think.  Suggestions, anyone?
Posted by norm magnusson at 3:37 AM No comments:

A local billboard advertising its proximity to a car dealership showed an enormous head with the headline: "Johnson Ford...just ahead." Bad. Good. So bad it's good? This is the eternal paradox that defines bad-vertising.

Years ago, some hot-as-the-dickens agency in Minneapolis did a super-cheesy spot for Easy Spirit dress shoes. It showed an actual game of basketball being played by actual women wearing the actual shoes and sported the not-so-elegant tagline: "Looks like a pump, feels like a sneaker." So bad it's good and supposedly crazy crazy crazy effective -- sales went through the roof. Our old friend and ad pro Stephen Hersh used to say "nothing beats a good product demo" and the Easy Spirit spot's success was certainly proof of that.

Why all this recent rumination on bad-vertising? Behold this spot in the spirit of Rodney "can we all get along" King:

Damn, we love the Casio. Here's a link to the guys who made this spot: http://rhettandlink.com/ make sure you watch the Taco-bell drive through folk-musical, it's very nicely done.
Posted by norm magnusson at 5:11 AM No comments:

Not sure what kind of a movement or how much of a movement this ad is gonna start, and there's fer sher a zeitgeist of 'movement starting' out there in the ad world and beyond, but we like this spot anyway and love the way it makes it all personal with 4 little words of copy, the last 4 of the spot.
Posted by norm magnusson at 8:40 AM No comments:

What is the sound of one hand slapping?

Via my favorite adblog: Brand Flakes for Breakfast.  Enjoy; it's mesmerizing:
Posted by norm magnusson at 12:31 PM No comments:

The Bahamas has been advertising again, putting their commercials in the highbrow places we're likely to see them: American Idol, CSI, Celebrity Rehab.  We're delighted to see this lovely logo once again. It was created by Duffy and Partners (http://www.duffy.com/) a few years ago and feels fresh as the day it was born.  The individual colored circles and shapes represent the 700 islands in the chain of islands that make up the country.

Posted by norm magnusson at 3:48 AM No comments: