Well, like lots of seasoned ad folks, we've done our share of booze advertising over the years. Enough to keep the whole of America intoxicated, inebriated, drunk, tipsy, plastered, smashed, blotto, blitzed, baked, blasted, bombed, sozzled, sauced, soaked, stinko, hopped up, gassed up, loaded, tight, loose, three sheets to the wind, and in their cups for a long long time.

We've worked on more booze than you can shake a finger at: Absolut, Boru,  Captain Morgan (where we coined the word "chillax"), Celtic Crossing, Chivas Regal, Christiania, Ciroc, Courvoisier, Crown Royal, and many many others, whose names fall further down the alphabet. We've even worked on booze from the art side of our aisle once; this ad for Absolut: 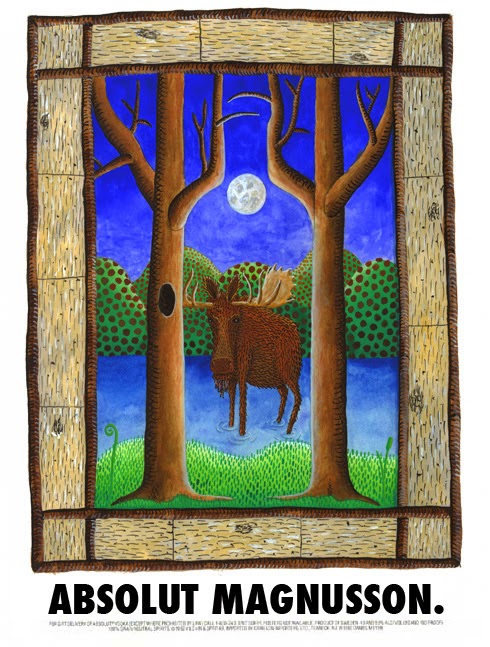 What we always like about doing booze advertising is that we always like booze. We like the social aspect of it best and we like the effect it has on us. We like whipping up a mean new cocktail for friends and trying a new micro-brew beer. We love a big Aussie shiraz with a steak on the barbie and a not too dry Champagne to celebrate milestones. We love it all. But back to the advertising part of it: we love sharing that love with others. We love creating an image for a product in a category that is wide open receptive for some crazy cool images. We love print ads and table tents and coasters and bar events and clever sponsorships and everything.


So, here's a small batch of creative hootch we've distilled from all those years of making liquor ads:


The client had some research that said people were sick of new vodka brands and all their B.S. advertising. So they decided that Boru would be the no-B.S. brand and sent us packing to execute around this idea.

We loved it. And, as it turned out, Boru's main product attribute (apart from being from Ireland) is that it's triple-distilled. An attribute that helped us to latch onto the concept of "clarity" as sort of the anti-B.S. positioning. Once that was in place, the campaign flowed like a Boru-tini: "Boruisms". Little gems of wisdom, aphorisms that would represent the anti-b.s. nature of our product. The tag line was easy to land on after the campaign had been decided and everyone loved the anti-b.s., straight-shooting line: "clarity from Ireland."

The campaign was a blast to work on and it won a bunch of awards, got a lot of press, and sales went up nearly 500%.

Not too shabby. Here below is some of the work: 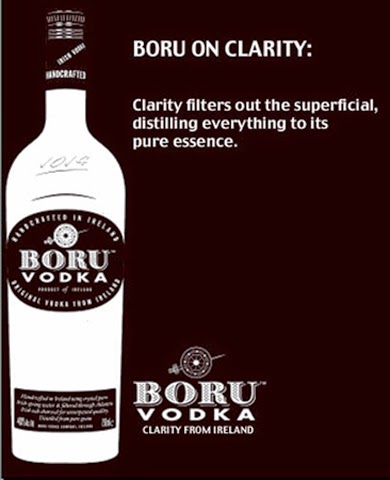 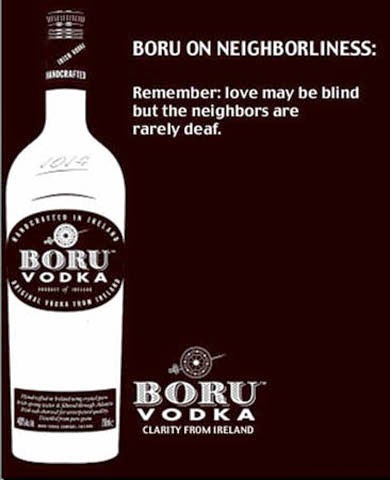 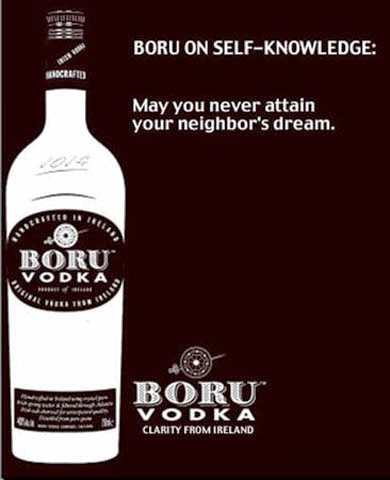 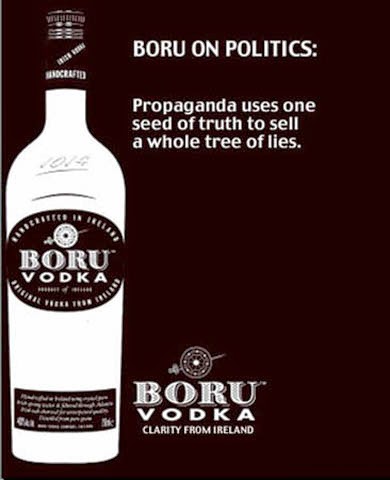 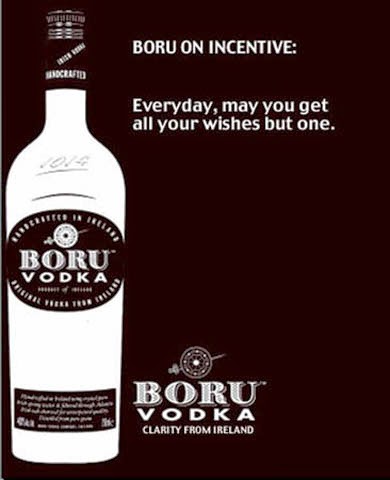 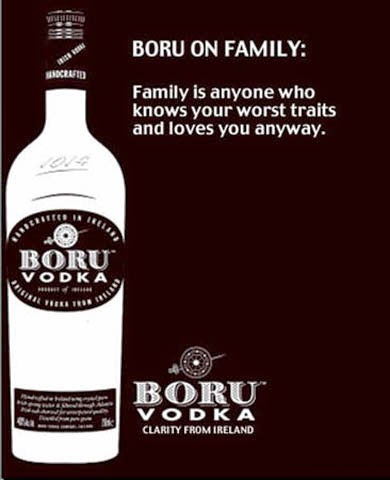 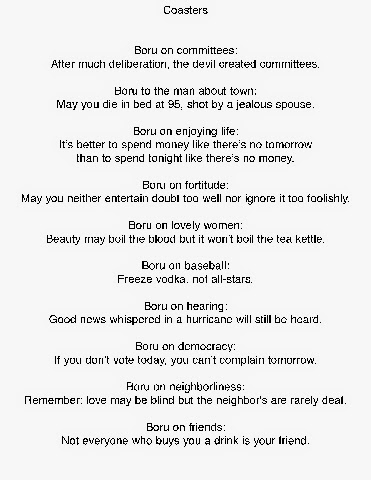 Next up on our little trip down muddled memory lane is a fun campaign we did freelancing for TBWA/Chiat Day and the great Scott Carlson, who wanted "ArtForum" kinda musings defining what "it" is -- in the tag line, "You either have it or you don't." Some of the best of the batch are below: 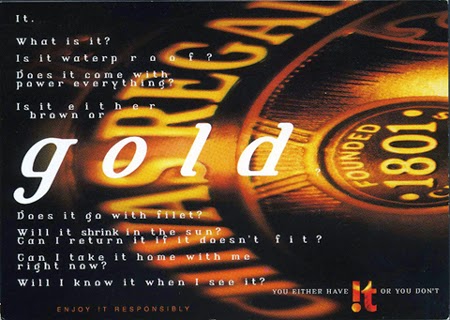 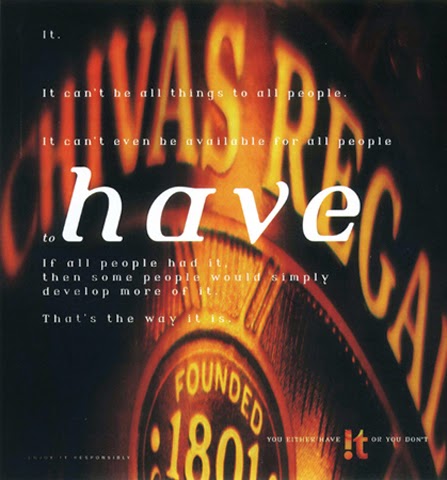 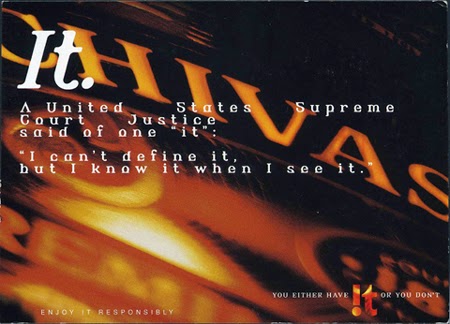 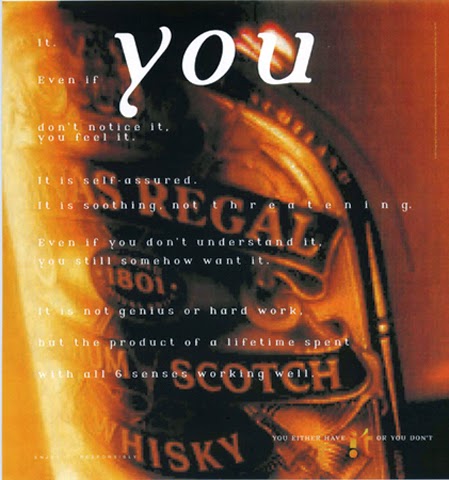 For Grey advertising, we created this campaign that came right straight out of their market research (yes, we loooove market research) that Crown Royal was a stepping stone brand that came after beer and Captain Morgan and before the single malts from the Isle of Islay. We came up with a bunch of fun headlines that completed the sentence "You reach a point where . . . " with lifestyle and age appropriate thoughts. Again, the tag line practically wrote itself: Crown Royal. The taste of experience. 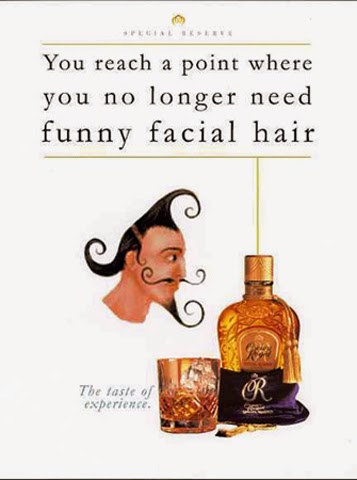 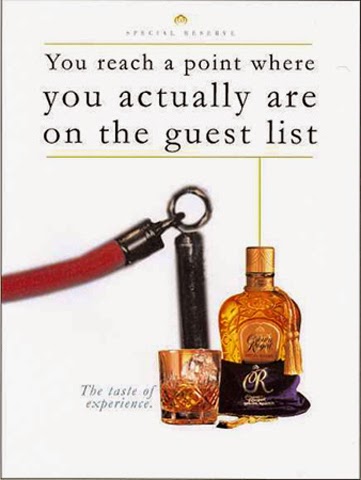 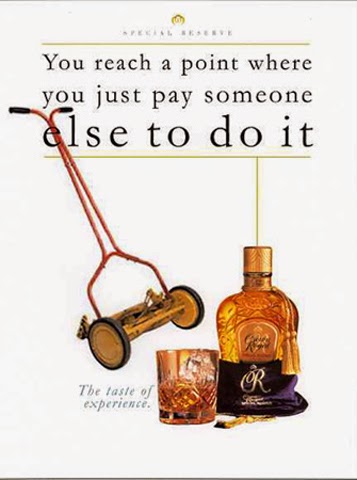 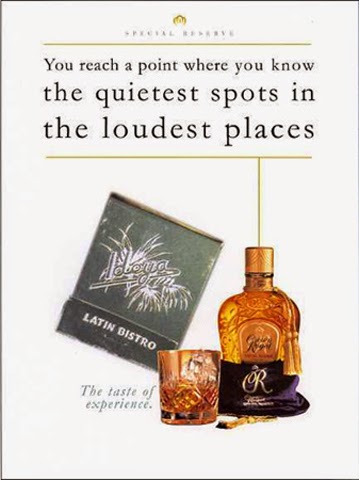 SAUZA - A family of tequilas

While we wrote the campaign that eventually saw the light of day, it's this campaign, a runner up that everyone loved but no one loved enough, that we like best. Tequila in general (though it's changing a bit now) is a booze for a wild night out. We wanted Sauza to pay homage to that but also to be seen as slightly more upscale. These ads take a literary approach to the crazy nights in which Sauza tequila played a role: (click on them to see bigger.) 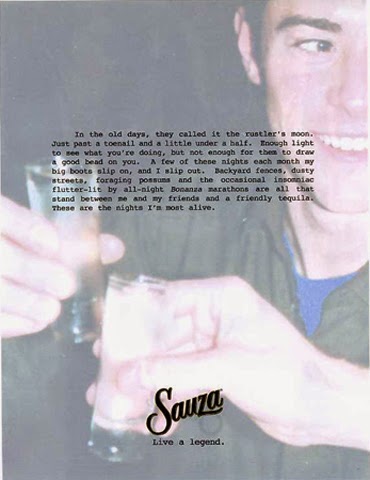 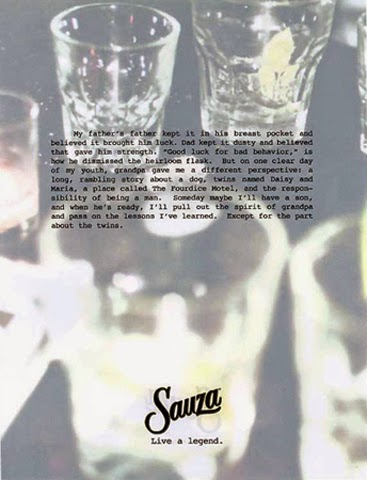 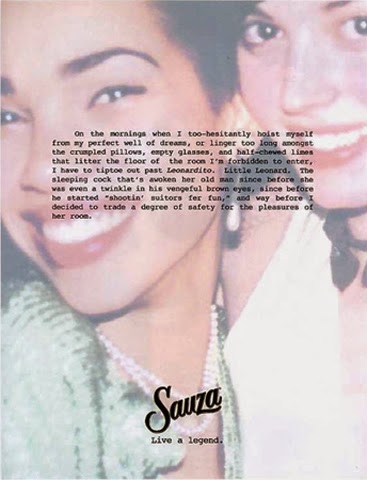 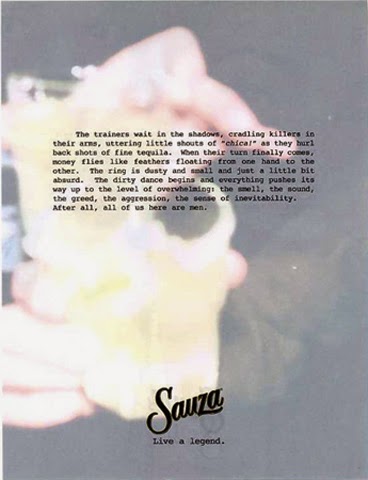 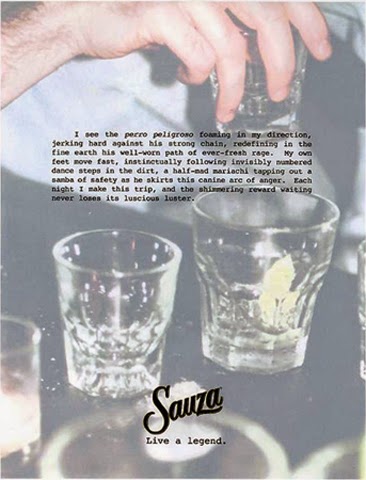 copy from the ad above:

I see the perro peligroso foaming in my direction, jerking hard against his strong chain, redefining in the fine earth his well-worn path of ever-fresh rage.  My own feet move fast, instinctually following invisibly numbered dance steps in the dirt, a half-mad mariachi tapping out a samba of safety as he skirts this canine arc of anger.  Each night I make this trip, and the shimmering reward waiting never loses its luscious luster. 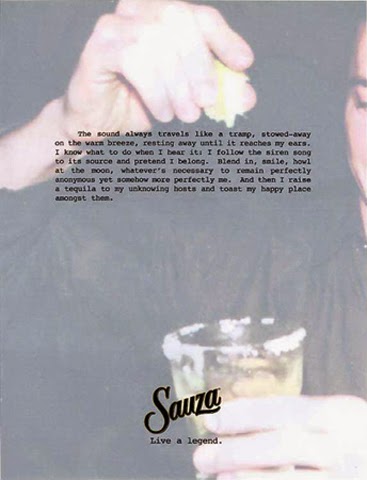 So that's it for our small summation of lovely booze ads. A range of work representing differing product attibutes, different strategies and different targets.

We'd love to bring our little liquor storehouse of fresh ideas to help your new or old brand. Give us a call; we'll talk over a drink.

Posted by norm magnusson at 7:10 AM